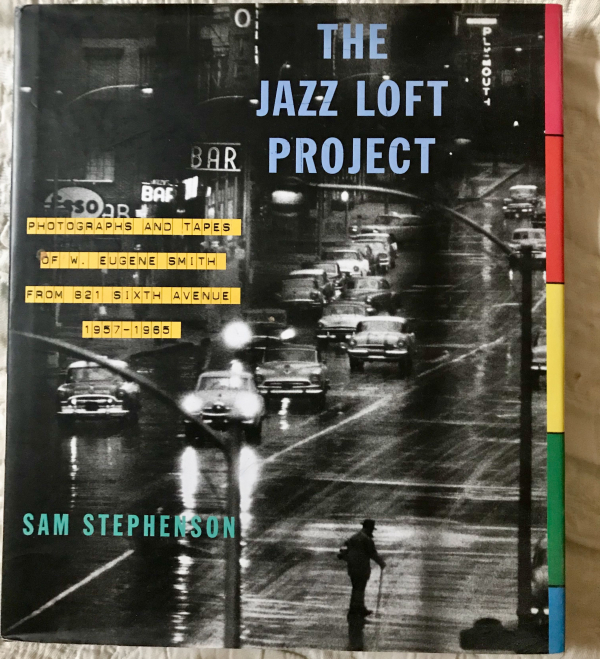 Some years ago I picked up a photographic monograph in  West End Lane Books, a great independent bookshop in West Hampstead London.  The book is called the jazz loft project by Sam Stephenson.  In the book are many photos of  821 6th Avenue, the flower district by day and a jazz haunt by night. The photographer W. Eugene Smith  moved into 821 in between 28th street and 29th Street and began documenting the building its visitors and residents and the ever-changing scenes on the Avenue below.

To quote from the introduction

“ W. Eugene Smith sits at the fourth floor window of his dilapidated loft at 821 6th Avenue, New York City, near the corner of 28th Street, the heart of Manhattan’s flower district. He peers out on the street below, several cameras at hand loaded with different lenses and film speeds. His window faces east from the west side of sixth Avenue. The dawn light begins to rise behind the Empire State building and other midtown skyscrapers looming over the modest neighbourhood. Three musicians stand together on the sidewalk talking and laughing.     One holds an upright bass in its case, another has a saxophone case slung over his shoulder, and the other is smoking a cigarette.

It is 6 o'clock in the morning; the temperature is a moderate 30°. The musicians are going home after a night long jam session. Smith snaps a few pictures.

Across the street flatbed trucks unload fresh blooms for the shops that are preparing for daily business. At this time of year the local farms in Long Island, New Jersey, and Pennsylvania’s Dutch country grow roses in the greenhouse while Spider mums, lilies, carnations, orchids, chrysanthemums, and birds of paradise are imported from Florida. Then he hears the familiar sound of quarter inch tape flapping  at the end of the reel on a quarter inch  tape machine sitting in his nearby darkroom. He walks into a dark room and turns off the machine. He places  the reel in a box and labels it "zoot Sims, Roy Haynes, Ronnie free, Eddie DeHaas, Dave McKenna, Henry Grimes, John Miles, Fred Greenwell.    “

Stephenson points out that this is not  mere romantic speculation, there are literally tons of  photos and tapes documenting the decade or so that Smith shared the building with many cats of all descriptions; both literal  and figurative.  This dirty, run down, cold water, walk up was a seed bed for the arts and particularly for photography and music.  The list of musicians passing through runs into the hundreds.  There were pianos and drums permanently installed on multiple floors and players like Sonny Clark, Steve Swallow & Ronnie Free would form a rhythm section on top of which myriad horn players from the now famous to the unknown would blow for hours sometimes days. Zoot Sims was alleged to have blown non stop for 2 days straight for example.

Hall Overton was a a resident of the jazz loft and big pull for musicians, he taught straight composers, including Steve Reich,  and played jazz too. It was his classical credentials as a teacher at Yale, Juilliard  and the New School combined with his jazz chops that made him a good fit for Thelonius Monk  to arrange and Orchestrate the quirky geniuses music for a concert in 1959.  This resulted in the much revered “ Monk at the town hall”  gig and recording.  The process was repeated in later years  including  a Carnegie Hall performance .  

Who was in the band? What was Hall and Thelonious's process? What time did the rehearsals start?

Find out in Part 2