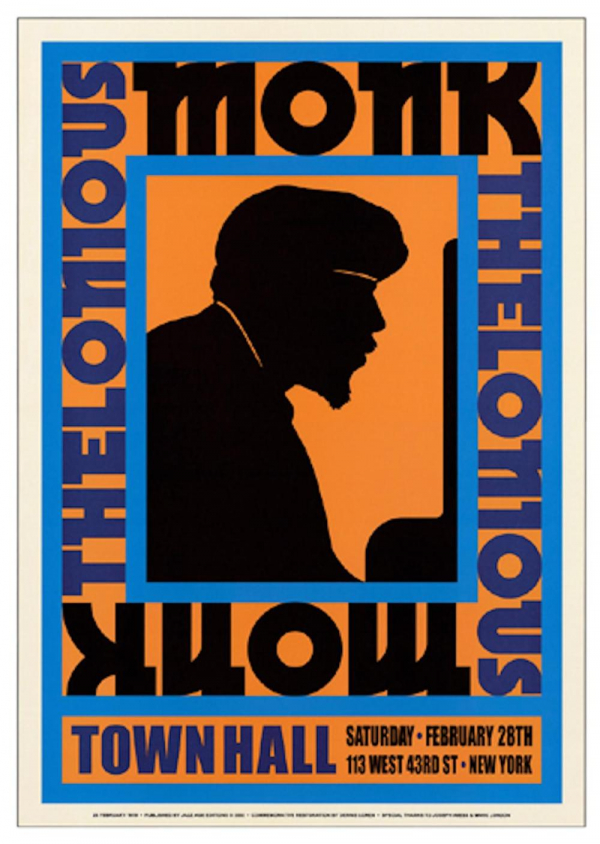 “In early 1959 Monk and Overton spent three weeks arranging (six of) Monk’s tunes for a “tentet” to perform at what became an historic concert at  Town Hall, the first time Monk’s music was ever performed by a big band. From private conversations between Monk and Overton to full band rehearsals in the loft, Smith’s tapes provide rare access to the exacting creative process and humanity of a musician who had become more myth than man.”

The poster for that gig has become a well known image, I even noticed it as one of the jazz posters on the wall of Barry Allen’s adoptive father Detective West, in DC’s series “the Flash” and the album is a much vaunted pillar of the jazz enthusiasts collection. Monk was not a Cabaret Card holder at the time, he lost it in 1948, again in ’51 and once more in ’58, which meant he could not play in the Manhattan clubs that served alcohol and New Yorkers had to travel to the outer boroughs to hear him perform, or his alter ego Ernie Washington,  but you didn’t need this document to play concert venues.

The gig on the last day of February 1959 (2 days before Miles Davis went into the studio to record the first Kind of Blue Session) was a huge success and the concept was repeated at Lincoln Center, Philharmonic Hall, New York,  on December 30, 1963 and Ira Gitler wrote a glowing review in the 27th February 1964 edition of Downbeat. There was another concert at Carnegie Hall on June 6th 1964 the second half of the concert was a rerun of 4 of the tunes from 1959 but  re-orchestrated for the December ’63 band which had not been performed on the gig.

Downbeat July 30th 1964 has an article by Martin Williams on the rehearsal that preceded the Carnegie concert and a less than glowing review of the gig by Dan Morgenstern. To be fair his beef was more with the first half where he felt the new bass and drum chair holders were not yet up to the job.

There was also an interesting TV broadcast  as Sam Stephenson records in “Gene Smith’s sink” a book of vignettes from 821  6th Avenue or “ the Jazz Loft” as his monograph and subsequent documentary called it.

“In 1963, Monk made a remarkable appearance with Overton at the New School in New York, broadcast live on the public station WNET, Channel 13. Back in the loft Smith put a microphone next to his television speaker and recorded the audio. Monk demonstrated his technique of “bending” or “curving” single notes on the piano, the most rigidly tempered of instruments. He drawled single notes like a human voice and blended them to create his own dialect, like making “y’all” from “you all.” “That can’t be done on piano,” Overton told the audience, “but you just heard it.”

To answer the questions raised at the end of part 1

2. What was Hall and Thelonious's process?

3. What time did the rehearsals start?

2.  Hall Overton worked with Monk for three weeks on 6 charts. Hall had 2 upright pianos side by side and he would listen to and watch Monk play his tunes. they spoke in music more than words and for Little Rootie Tootie Monk suggested they used the recording he had made as the template hence the Orchestrated Solo which impressed so much on the gig and recording.

3. The rehearsals began at 3.  “jazz musicians get up at the crack of Noon”  you are thinking but in fact they rehearsed from 3am and went through until past dawn.  This was because many of the players had gigs that finished late but also because there was nobody about in the commercial district before the Flowers started rolling in.

The first set of charts used the Miles Davis Nonet from “Birth of the Cool”  plus  Tenor Sax  Charlie Rouse being Monks tenor man in his small band. Although many people consider the French Horn and Tuba an odd choice they were  a part of Claude Thornhill’s band from 1940 ( tuba being added in 1947) and the sound of this band was influential.These less common instruments worked mainly because the Thornhill band eschewed vibrato so the Trumpets and trombones blended more in an orchestral manner.

The quiet, learned  Hall Overton was receptive to Monks Music and chose not to go large, brash or symphonic in the Stan Kenton way but to almost transcribe Monk’s voicings directly from his fingers to a medium sized ensemble that never over powered the music and represents it sparsely.  Overton was known for listening to his pupils and to try and bring out their voice , rather than impose his or any one system of composition.

In the Documentary version of “The Jazz Loft” Robert Northern talks about how hard he found it as a classical French Horn player, to play the rhythms with the right feel. He speaks of a break in the rehearsal where everyone left, but him and Thelonious,  because he wanted to practice the part on his own. Monk got up and without speaking went to the corner of the room and tapped out the rhythms for the whole part with his feet, Northern understanding now how to play the part faired much better when the band returned.  Of course there are the Marty Paich/Mel Torme collaborations which began in 1956 and resulted in  several albums featuring a Dektette with Horn and Tuba. In this case there was no piano and an extra trumpet was used instead. Paich refers to birth of the cool on more than one occasion musically quoting from the charts.The final “Swings Schubert Alley” album came out in 1960, and it is quite possible that Hall Overton was aware of these sides.

The Six Tunes orchestrated appeared on the original vinyl release

1. What made these charts work?

2. What were the differences between the 2 line ups?

3. What was the critical view of these concerts?

find out in part Three